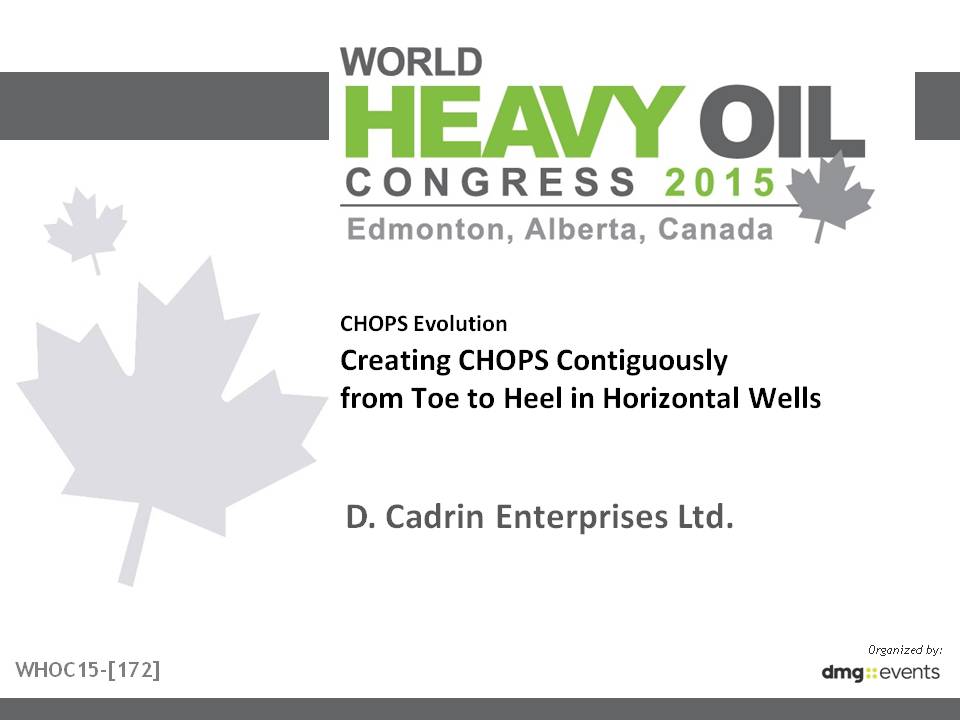 The intention of this presentation is to provide you with an immediately actionable process that will improve your company’s profitability.

CHOPS is the acronym for Cold Heavy Oil Production with Sand, a non-thermal recovery technique used in unconsolidated sandstone reservoirs. Inducing sand inflow has increased production rate by an order of magnitude and doubled recovery.

To date, CHOPS has been used only in vertical wells. Sequential CHOPS re-completions in horizontal wells from Toe to Heel spaced so that the resulting produced areas overlap could result in multiples of vertical well recovery at a capital cost per recovered barrel competitive with current practices.

CHOPS began when the progressing cavity pump overcame rod float making it possible to achieve maximum drawdown. At maximum drawdown disintegration of the near wellbore matrix and other formation alterations take place that increase rate and recovery.

Insular depleted areas form around a well when draining fluids from unconsolidated sandstone. This leaves up to 90% of the reservoir unaffected by production.

Horizontal wells in unconsolidated sandstone are designed to prevent sand inflow while obtaining production from long continuous sections of reservoir. Preventing sand inflow obstructs ultimate recovery. The long wellbore produces high rates that payout drilling and completion in an acceptable amount of time, but horizontal wells have been economic failures as they cost twice as much to drill and complete as a vertical CHOPS well for similar recovery. Horizontal well CHOPS can change this. 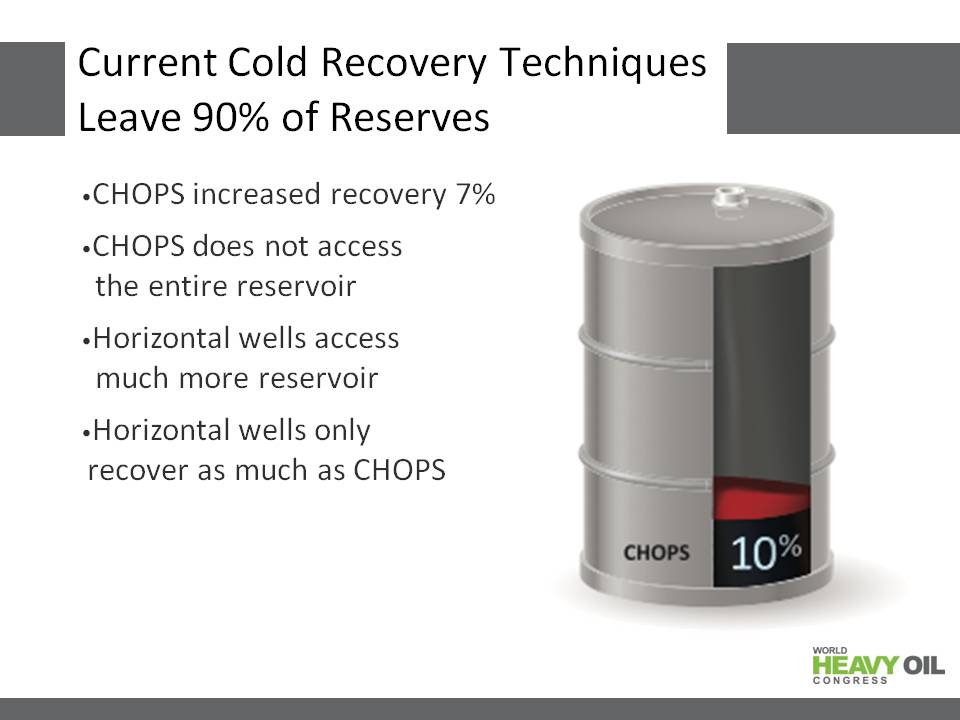 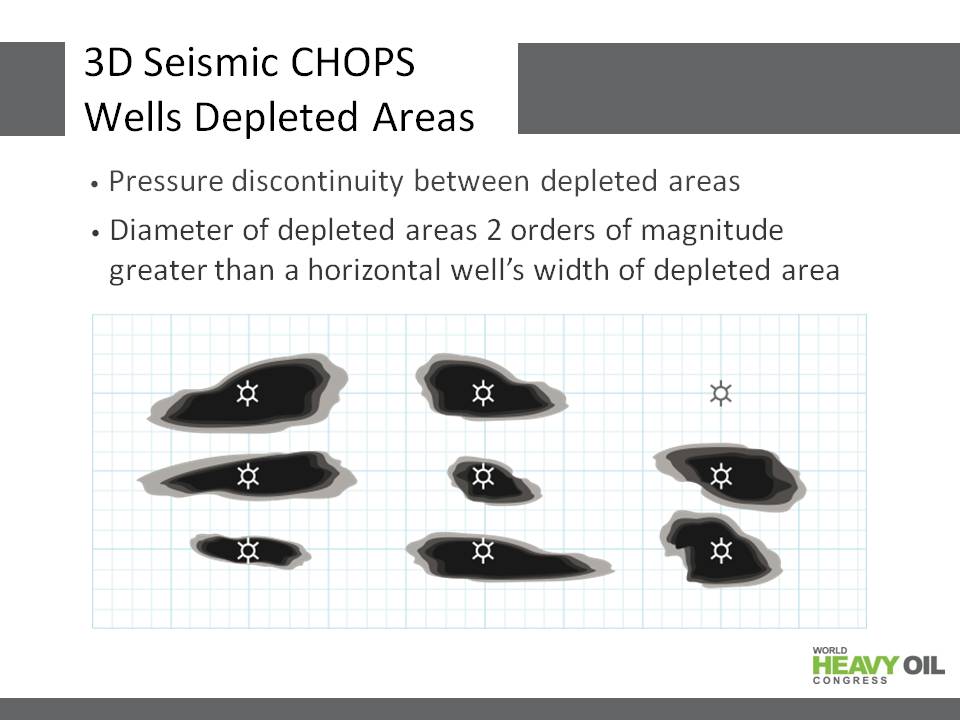 3D seismic delineated the drained areas surrounding CHOPS wells and showed large expanses of reservoir between wells were unaffected by production. Bottom hole pressure in a depleted well is less than 1% of original pressure and will remain so for years. Infill drilling outside the depleted areas encounters original reservoir pressure. These factors suggest the occurrence of phenomena in the reservoir that establishes pressure discontinuity between depleted areas.

The size of the seismic depleted area is similar to that of a drained area calculated from the volume of recovered fluids and sand. The diameter of the drained areas ranged between 100m and 300m. Applying volumetric calculation along a horizontal wellbore results in a drained area width up to two orders of magnitude less that the diameter of a CHOPS well.

It follows from these observations that Horizontal Well CHOPS would increase recovery in two ways: 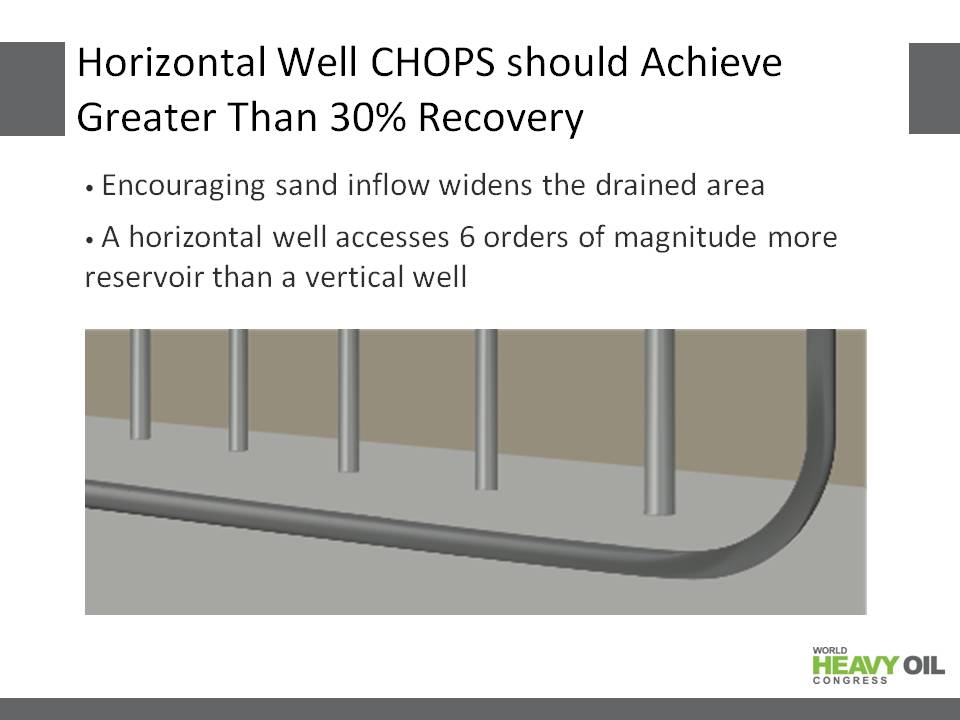 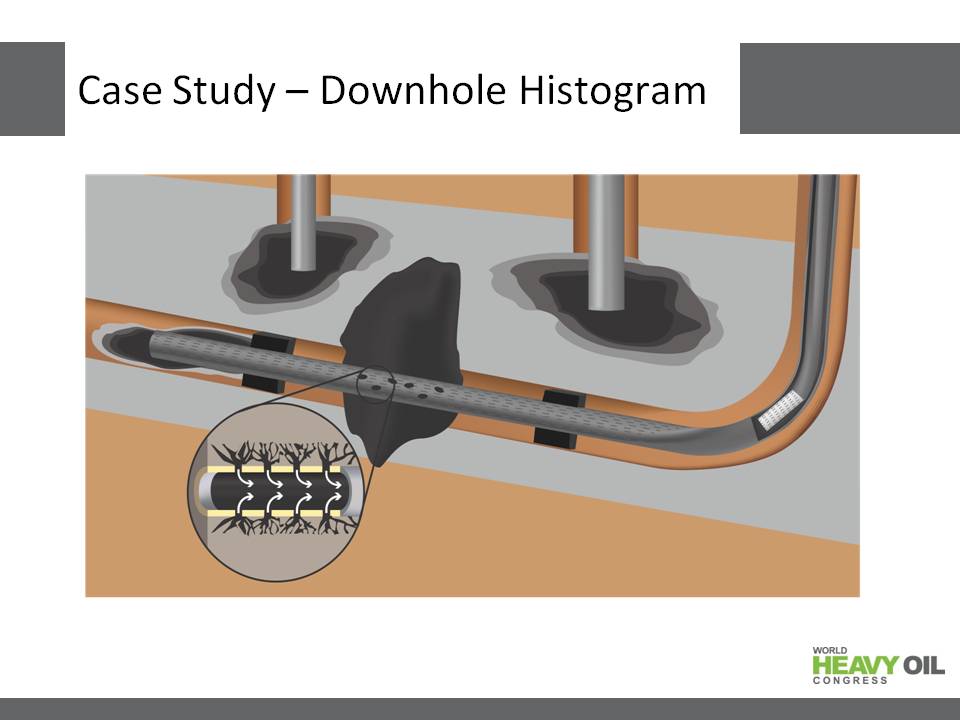 First, the Toe was isolated and produced to economic depletion. The isolation tools were then removed so that the entire liner could be produced. No change in production rate indicated no inflow from the other slot sizes.

Next, the Mid-Liner was perforated over a continuous 50m interval.

After the Mid-Liner perforations reached economic depletion the liner was perforated a second time. The second set of perforations consisted of 40m in the Heel, 20m in Mid-Liner 15m uphole from the first set, and 40m in the Toe.

The PCP was landed at the top of the build section at all times. Sand was encountered in the liner from the first set of perforations but only a trace of sand reached surface at anytime the well was on production.

The second perforation event is less informative in terms of the source of inflow due to perforations being made in the heel, mid-liner, and toe. Still, it successfully restored production and recovered 129% of the average from the off-setting vertical wells.

Of the 576 horizontal wells studied in this region, this was the only one found to be perforated after initial economic depletion. Also, it was the only horizontal well that recovered multiples of the volume of off-setting vertical wells.ur own text 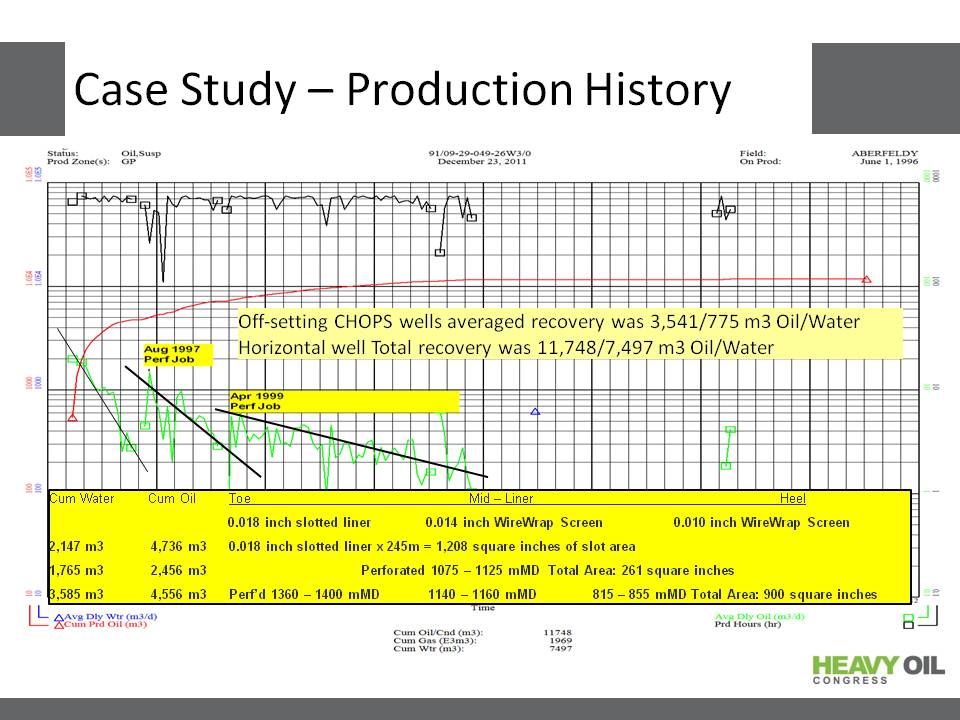 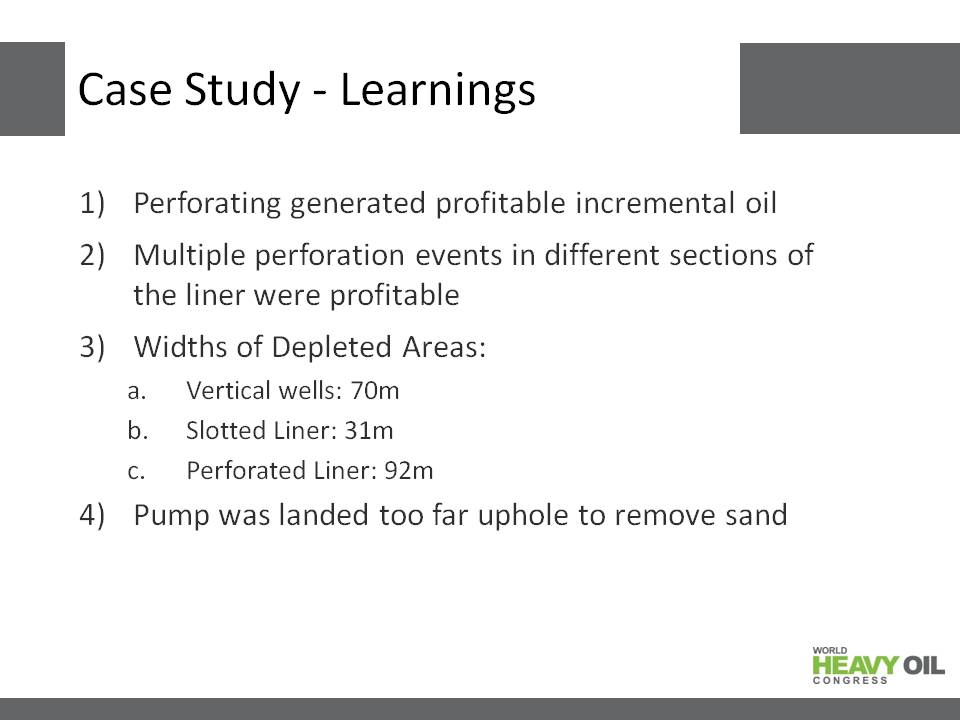 Horizontal wells in this area abruptly loose inflow much like the vertical CHOPS wells do. Early on it was believed that fill had entered and plugged the liners. Liner clean-outs at economic depletion recovered very little fill and did not improve inflow. These experiences led to the practice of suspending a horizontal well when it reached economic depletion.

The fact that incremental recovery was obtained twice through perforating after the case study well had reached economic depletion suggests that there are several hundred wells in this region that could at least double recovery by sequentially perforating the liner.

Comparing the widths of depleted areas emphasizes the extent that recovery could be increased by perforating the liner to restore inflow.

To ensure optimum fluid production in vertical CHOPS wells, the bottom of the pump is landed below the perforations to keep the perforations clear of sand. The PCP in this well had to be landed hundreds of meters from the perforations to avoid rapid rod and/or tubing failure. Trace amounts of sand at surface indicated that the bulk of the sand flowing into the liner could not be transported such a long distance to reach the pump intake.

Conventional oil horizontal well producers report that re-completion of liners by perforating to allow for controlled intermittent production of solids for brief periods stimulates inflow that had been declining. The paradigm shift from doing all that was possible to prevent sand inflow, to doing all that is possible to maximize sand inflow occurred in cold heavy oil with the introduction of the PCP. These two situations exemplify that when the benefits of inducing sand inflow become apparent, engineered solutions for producing, handling, and disposing of produced sand become part of the daily operations.

Knowing CHOPS has a finite diameter depleted area, re-completions would have to be sequenced from Toe to Heel to tap all of the reservoir along the length of the well. 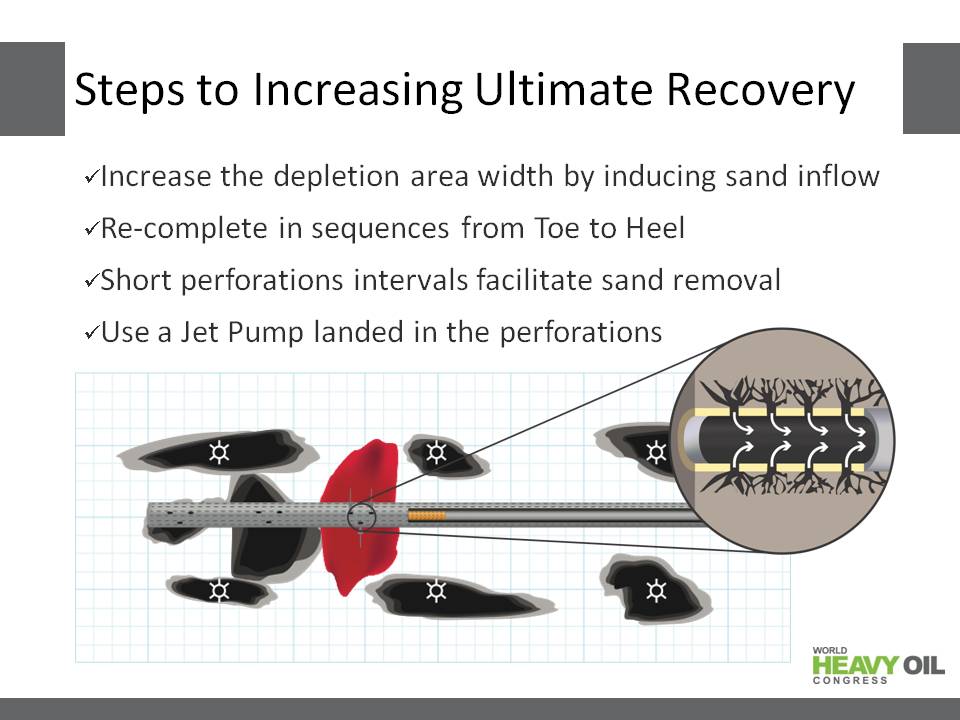 With no downhole moving parts, effective operation at any angle, ability to pass through the build section without damage, no rod string, no electric cable, relatively small diameter, short length, low risk of destruction when pumped off, and the ability to produce high solid content fluids and viscous fluids are attributes that make the jet pump more suited to this application than other pump systems. Although it has a reputation for lower efficiency and greater energy consumption than other pump systems, it is the pump for this job. 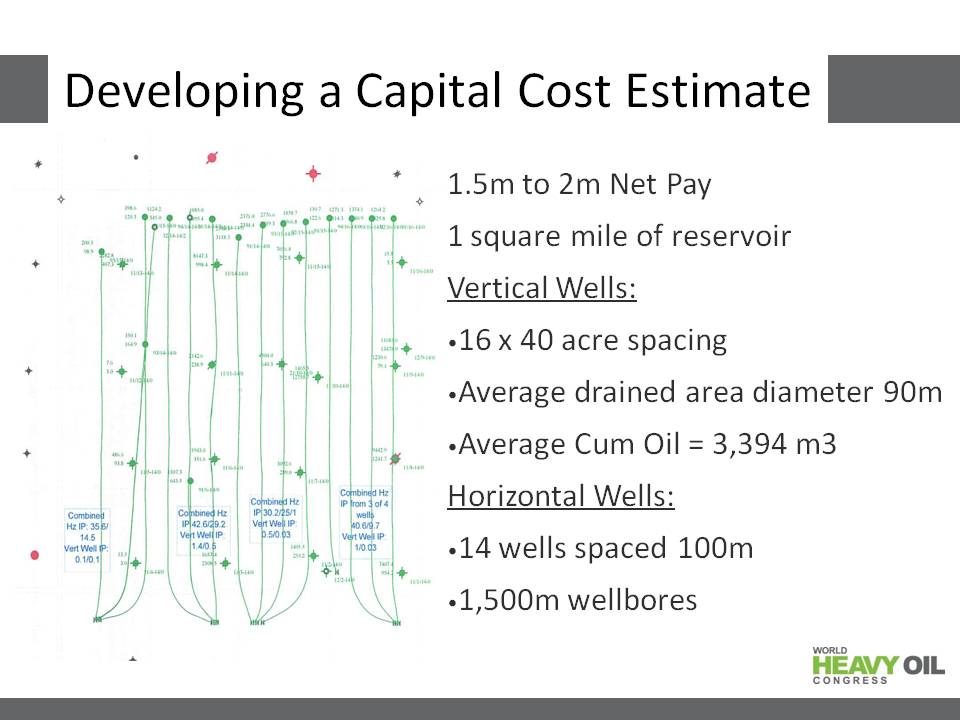 A section of land in Tangleflags having both vertical and horizontal wells in the Lloydminster zone provided the production profiles used to generate a capital cost estimate per recovered barrel.

This is the least prolific zone in the region but it is contiguous over many square miles. Thousands of wellbores have produced from this zone making it a reliable source for developing a capital cost estimate for a low quality reservoir. If horizontal well CHOPS can be shown to be profitable in this reservoir, it would be more profitable in reservoirs with better pay.

The vertical wells had been drilled and produced to depletion about 20 years before the horizontal wells were drilled. The averaged recovery from these wells is used as the expected recovery per sequenced re-completion in horizontal well CHOPS.

This region has multiple pay zones. Typically a vertical well is not drilled with the Lloydminster being the sole target because the recovery is too low for an attractive capital cost per recovered barrel. 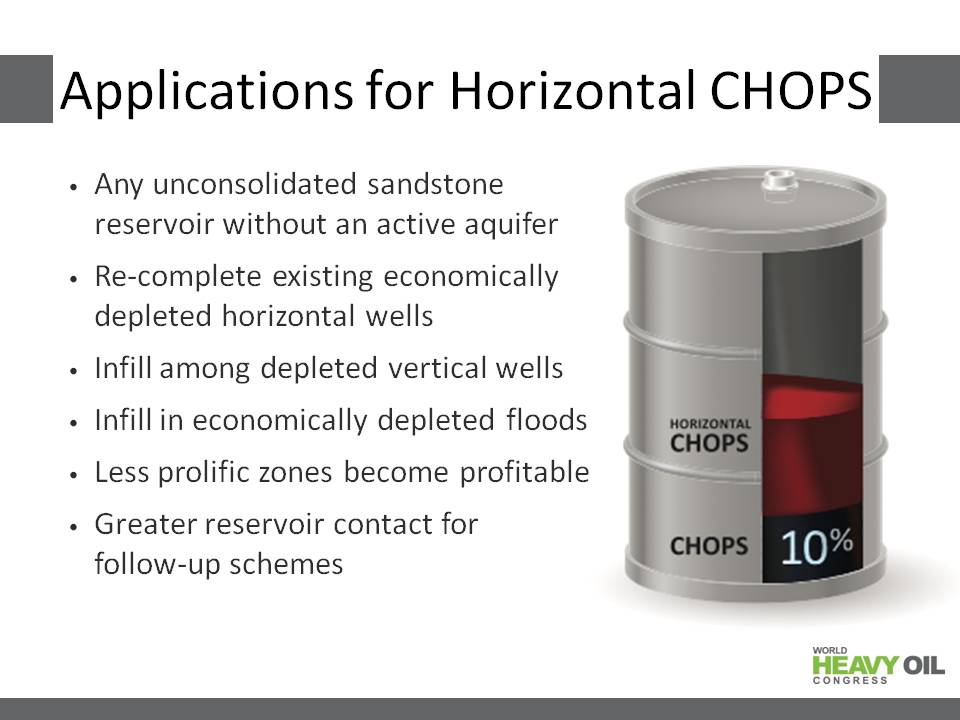 CHOPS occurs when maximum drawdown is applied to unconsolidated sandstone.

At maximum drawdown, an active water aquifer or gas cap breaks through in a few months. The characteristics and behavior of unconsolidated sandstone makes reversal virtually impossible resulting in lost reserves.

Vertical well flood schemes recover 8% to 12% due to the rapid formation of channels between injectors and producers that leave large areas of the reservoir unreachable by injected fluids. Infill drilling parallel horizontal wells for horizontal well CHOPS at any time in the flood’s life cycle could effectively reach these areas. Shutting down fluid injection in floods after the wells have been placed would mitigate loosing circulation in channels created by the flood.

Successful horizontal well CHOPS should leave a marginal amount of residual oil. If the remaining volume of oil becomes economically attractive, the length of reservoir directly accessed by parallel horizontal wells would improve the effectiveness of secondary recovery schemes.

Thirty-five years ago practically no one could imagine that a progressing cavity pump would be competitive with a pumpjack and rod pump, let alone that it would totally replace them and create a step change in profitability and recovery of cold heavy oil.

Similarly, until today, it would have been challenging to consider that another step change in cold heavy oil recovery and profitability could be achieved by causing sand laden fluid production from horizontal wells.

We know that oil prices cycle. Low oil prices provide auspicious circumstances to begin the process of sequential re-completion of economically depleted horizontal wells such as: 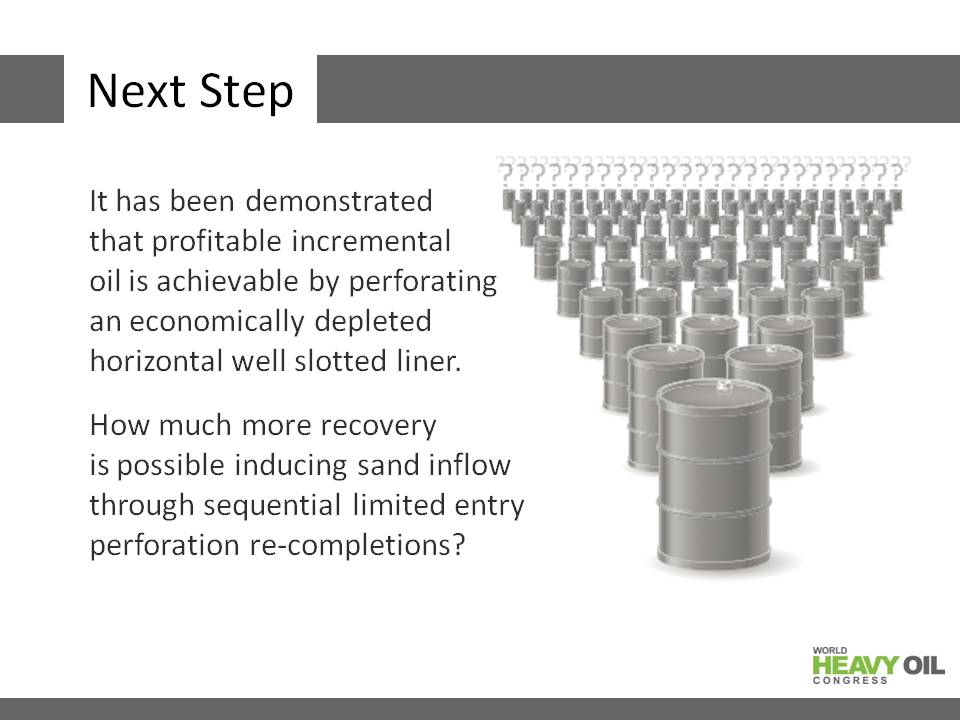